A Pathway to Diplomacy

The following is the author’s introduction to his book, A Pathway to Diplomacy, which has recently been published by the UST Publishing House.  Copies are now available at selected branches of National Book Store and Powerbooks.  They may also be directly obtained from: 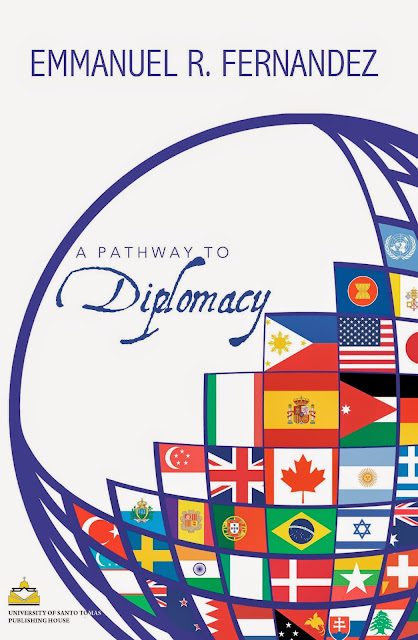 There is no single pathway to diplomacy.  In the Philippines, as in many other parts of the world, one who wishes to pursue a diplomatic career is not required to arrive at his destination via a standard (much less, an obligatory) route.  There are, rather, many possible roads he can take to reach his goal.  In fact, he can even create his own path to diplomacy.
For one, an aspiring diplomat is not required to earn a specific university degree in order to qualify for the annual Foreign Service Officers’ Examination (or FSO Exam).  Unlike the bar and board exams, which can only be taken by those in possession of a specific university degree,  the FSO Exam can be taken by anyone---regardless of his university degree---as long as he fulfills all the other non-academic requirements for the exam.  Having a degree in foreign service or in international relations can, of course, be an advantage; but it is definitely not a must.  Any university degree will do.  What matters is that the aspirant can show, through his performance in the FSO Exam, that he has the intellectual, emotional, psychological, moral and practical ability to represent his country abroad, and to advance his country’s interests in bilateral, regional and international fora. 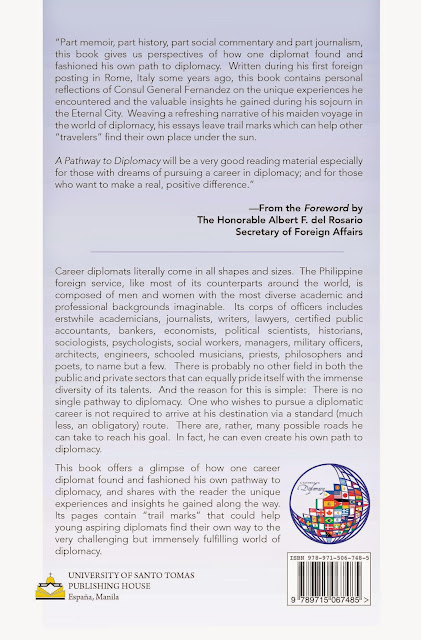 It should hardly come as a surprise, therefore, that career diplomats literally come in all shapes and sizes.  The Philippine foreign service, for example, is made up of men and women with the most diverse academic and professional backgrounds imaginable.  Its corps of officers consists of erstwhile academicians, journalists, writers, lawyers, certified public accountants, bankers, economists, political scientists, sociologists, psychologists, social workers, military officers, architects, engineers, schooled musicians, priests, philosophers and poets, to name but a few.   There is probably no other field in both the public and the private sectors that can equally pride itself with the immense diversity of its talents.
But this vast multiplicity of talents is not the only consequence of the foreign service’s “openness” as far as academic and professional backgrounds are concerned.  The other is that, since the FSO Exam does not require of the aspirant a prior education or training in diplomacy, a career diplomat literally has to learn the ropes of his profession as he goes along.  He acquires his craft not before he sets about his work, but while doing it.   He is, in the truest sense, trained to be a diplomat on-the-job.  He is, of course, given a formal training in diplomacy at the start of his career.  After passing the FSO Exam, he is made to undergo what is called in the Department’s parlance the “cadetship program,” wherein he will be trained in diplomacy from its most rudimentary skills to its most profound theories.  But his education as a diplomat does not end there.  In fact, it can be said that his real education in diplomacy begins when he steps out of the Department’s Foreign Service Institute (where the cadetship program is held) and joins one of the Department’s various offices.
My own on-the-job training as a diplomat started at the Office of the Undersecretary for Migrant Workers’ Affairs, where I was assigned shortly after finishing the cadetship program in mid-2000.  It swung into high gear during the six and a half years that I spent in Rome as Third Secretary and Vice Consul, and later, as Second Secretary and Consul of our Embassy to the Italian Republic.
The Philippine Embassy in Rome (Rome PE) is not an easy assignment.  Italy has one of the largest Filipino communities in the whole of Europe.   In addition,   the city of Rome hosts the headquarters of several U.N. bodies and other international organizations. Serving as an Alternate Representative to these international organizations is part of the functions of a Filipino diplomat assigned in Rome, over and above his usual bilateral diplomatic tasks.
Fortunately, I enjoyed a peculiar advantage during my posting there:  for the greater part of my sojourn in Rome, I was a single man who had all the time to myself the moment I got home.  Unencumbered by the responsibilities that go with having a wife and children, I had more than enough opportunity to reflect on and write about the things I experienced and about the issues that engaged my mind during my stay there. The essays in this collection were the fruits of those solitary hours.  They were written between 2005 to 2008, on weekends when I did not have to leave the house to attend a community affair or take care of an urgent assistance-to-nationals (ATN) case.  Naturally, the themes and topics of these essays reflect my interests and preoccupations at that time:  the theory and practice of diplomacy; the lives and ideas of the leaders and thinkers who had, in one way or another, shaped my own life and thoughts; art and literature; and an assortment of subjects that I tried to understand better by putting my thoughts on paper.
Yet, varied as their themes and topics may be, a common thread actually runs through these essays:  They constitute a written record of the insights I came upon and the lessons I learned in the course of my first foreign posting as a fledgling diplomat.   They are, as it were, the jottings I wrote down on my maiden voyage in the challenging but exciting world of diplomacy.
They say that our first experience in any area of life exerts a lasting impact upon us.  In fact, it usually sets the tone and shapes the character of our subsequent engagements in that particular sphere.  My maiden posting in Rome has taught me lessons and given me insights which, I am sure, will continue to stand me in good stead in the years ahead.  If other diplomats can find something useful for themselves among the varied thoughts that these essays contain, then writing them shall have been worth it many times over.
But the publication of this book was inspired not only by the desire to share with my colleagues in the foreign service the lessons and insights I gained during my first posting in Rome. It was also stirred by the desire to offer something useful to the thousands of young men and women who dream of becoming career diplomats someday. There are a lot of highly romanticized ideas about diplomacy and the diplomatic life that are floating around in university campuses, and many young people have been attracted to the foreign service largely on account of these glamorized notions of the diplomatic career. Unfortunately, the actual work and lifestyle of the diplomatic profession do not exactly match their idealized representations.  The essays in this book can help aspiring diplomats acquire a more realistic picture of what they would be getting into, should they decide to join the diplomatic service.
Diplomacy is by no means an easy calling.  But, as I hope these essays will reveal, it is definitely one of the most fitting vocations for anyone who genuinely wishes to serve his country and, in some way, make a difference in our world.

Posted by Diplomatic Jottings at 6:00 AM No comments: Links to this post